Ebola (EVD-Ebola Virus Disease) is a rare but very serious infectious disease caused by the Ebola virus. Due to specific symptoms that occur in the infected people this infection is also called Ebola hemorrhagic fever. The disease has a high mortality rate, between 50% and 90%. Ebola was first identified in Sudan and the Democratic Republic of the Congo. One outbreak occurred in a village near the Ebola River, from which the disease was named.

It is believed that animals, so-called “Fruit” bats are the natural host of the Ebola virus. Ebola is a predominantly infectious disease of rain-forests wildlife, but it can also be transmitted from animals to humans. Humans can infect themselves by close contact with the blood, organs, secretions or other bodily fluids of infected animals. Then Ebola spreads through human to human transmission in two ways – in direct contact with blood or bodily fluids of a sick person or someone who has died from Ebola and in indirect contact with contaminated objects.

The disease begins suddenly, typically 2-21 days after exposure to the virus with a fever, muscle pain, weakness, headache and sore throat. Following that, nausea, vomiting, diarrhea, rash and impaired liver and kidney function occur. Some patients experience extensive internal and external bleeding, such as bleeding on the skin, bleeding from the nose and other mucous membranes; some patients vomit blood and others have found blood in their stool. 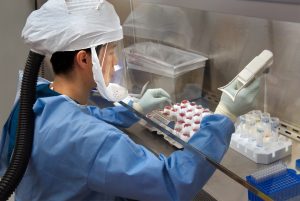 Patients are contagious as long as the virus is present in bodily fluids. The virus persists for the longest time in sperm (up to three months after cure). The fact that the person has traveled to countries with Ebola outbreak is important information but the diagnosis of the Ebola can be made by detecting viruses or antibodies in the blood and bodily fluids of diseased persons.

The Ebola virus can be destroyed by soap, disinfectants, sun rays or drying. Washing laundry contaminated with bodily fluids of an infected person in the washing machine will destroy the Ebola virus. The virus lives very briefly on surfaces that are in the sun or on dried surfaces.

Unfortunately, there is no proven treatment available for this disease. Therapy includes supportive care – rehydration with oral and intravenous fluids and treatments that relieve the patient’s symptoms, such as painkillers, fever medications or vitamins. Scientists are working to create an Ebola vaccine. To date the results are promising.

The risk of getting Ebola in normal circumstances is low including those who have traveled to epidemic-stricken areas. However, if an individual has developed fever, diarrhea, severe muscle and joint pain, weakness, or any of the above listed symptoms of the disease within 21 days of returning from countries where Ebola is currently reported should seek medical attention immediately. This is crucial in clarifying what the disease is about and to begin treatment (the symptoms listed may be symptoms of another tropical disease such as malaria).